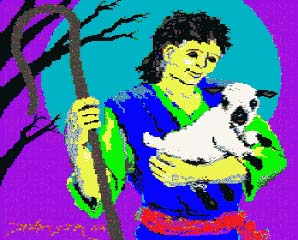 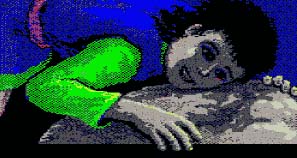 On a hillside, gathering dried brush for the night's watchfires, Duncan paused for a moment, looking at the sunset.

"Sky-gods, help me," he prayed. "And earth-gods, the dark wolf should be under your dominion. If you will not grant me a sign, at least help me deal with the wolf." He bent routinely and laid his ear to a rock. Every day he asked some god for a sign, but never--

He heard a voice. He crouched there, listening to the rock, unable to believe. Surely it was a waterfall he heard, or running cattle somewhere near. But no, it was a real voice, booming and shouting in some buried distance. He could not make out the words, but it was a real god-voice from under the earth.

He straightened up, tears in his eyes, even the sheep for a moment forgotten. This wonderful sign was not for half the world, this was for him! And he had doubted that it would ever come.

To hear what it said was all-important. He bent again and listened. The muffled voice went on unceasingly, but he could not understand it. He ran a few steps up the hill, and put his ear against another exposed earth-bone of rock. Yes, the voice was plainer here; sometimes he could distinguish a word. "Give," said the voice. Mumble, mumble. "Defend," he thought it said. Even the words he recognized were spoken in strange accents, like those of a man from some far tribe.

He realized that darkness was falling, and stood up, in fearful indecision. The sheep were still his responsibility, and he had to light watchfires, he had to, for the sheep would be slaughtered without them. And at the same time he had to listen to this voice. 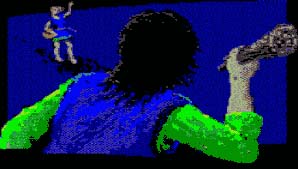 A form moved toward him through the twilight, and he grabbed up his club--then he realized it was Colleen.

She looked frightened. She whispered: "The sun went down, and I feared the dark. It was a shorter way back to you, than on to the village." 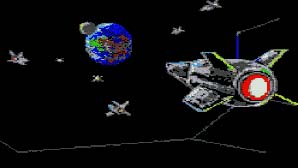 The berserker moved in toward the nightside of the planet, quickly now, but still with caution. It had searched its memory of thousands of years of war against a thousand kinds of life, and it had remembered one other planet like this, with defensive satellites but no cities or radios. The fortifiers of that planet had fought among themselves, weakening themselves until they could no longer operate their defenses, had even forgotten what their planet-weapons were. Then the life on that planet was helpless, and the berserker had left no life upon it, taking only a few prisoners to learn the cause of their weakness.

The life here might be shamming, trying to lure the berserker within range of the planet-weapons. Therefore the berserker sent its mechanical scouts ahead, to break through the satellite-net, and range over the land surface, killing, until they provoked the planet's maximum response. 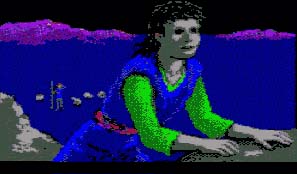 The fires were built, and Colleen held the spear and watched the sheep. Wolf or not, Duncan had to follow his sign. He made his way up the dark hillside, listening at rock after rock, and ever the earth-god voice grew stronger.

He held his breath, listening. Now he could hear the voice while he stood erect. There, ahead, at the foot of a cliff, were slabs of rock tumbled down by snowslides. Among them might be a cave.