The dark shape, big as a man, came between the two smallest of the three watchfires, moving in silence like that of sleep. Out of habit, Duncan had been watching that downwind direction, though his mind was heavy with tiredness and with the thoughts of life that came with sixteen summers' age.

Duncan raised his spear and howled, and charged the wolf. For a moment the fire-eyes looked steadily at him, appearing to be a full hand apart. Then the wolf turned away; it made one deep questioning sound, and was gone into the darkness out beyond the fires. 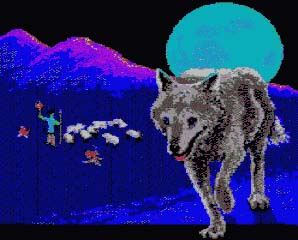 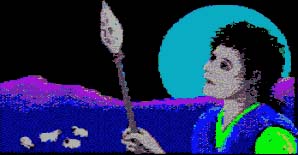 Duncan stopped, drawing a gasping breath of relief. His charge had not been courage. The wolf would probably have killed him if it had faced his charge, but it did not yet dare to face him in firelight.

The sheeps' eyes were on Duncan, a hundred glowing spots in the huddled mass of the flock. One or two of the animals bleated softly.

He paced around the flock, sleepiness and introspection jarred from his mind. Legends said that men in the old Earth-land had animals called dogs that guarded sheep. If that were true, some might think that men were fools for ever leaving Earth-land.

But such thoughts were irreverent, and Duncan's situation called for prayer. Every night now the wolf came, and all too often it killed a sheep.

Duncan raised his eyes to the night sky. "Send me a sign, star-gods," he prayed, routinely. But the heavens were quiet. Only the stately fireflies of the dawn zone traced their steady random paths, vanishing halfway up the eastern sky. The stars themselves agreed that three-fourths of the night was gone. The legends said that Earth-land was among the stars, but the younger priests admitted such a statement could only be taken symbolically.

The heavy thoughts came back, in spite of the nearby wolf. For two years now Duncan had prayed and hoped for his mystical experience, the sign from a god that came to mark the future life of every youth. From what other young men whispered now and then, he knew that many faked their signs. That was all right for lowly herdsmen, or even for hunters. But how could a man without a genuine vision ever be much more than a tender of animals? To be a priest, to study the things brought from old Earth-land and saved--Duncan hungered for learning, for greatness, for things he could not name. 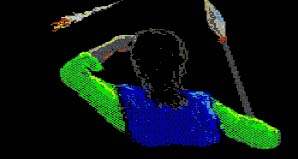 He looked up again, and gasped, for he saw a great sign in the sky, almost directly overhead. A point of dazzling light, and then a bright little cloud remaining among the stars. Duncan gripped his spear, watching, for a moment even forgetting the sheep. The tiny cloud swelled and faded very slowly.

Return to Fred's Homepages looked steadily at him, appearing to be a full hand apart. Then the wolf turned away; it made one deep questioning sound, and was gone into the darkness out beyond the fires.