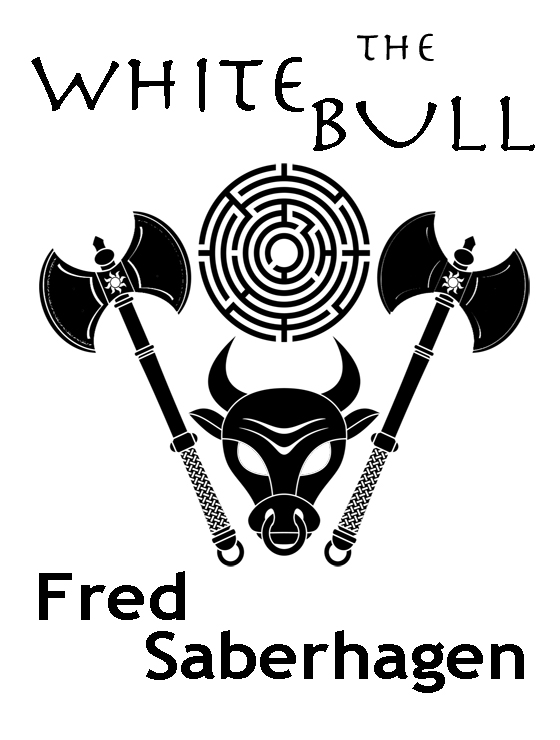 
In the reign of Minos, King of the Cretans, the gods gave proof of their existence: a bull-headed man accompanied by his bronzen servitor strode forth from Neptune's realm. At last the gods had removed the veils that separated them from their worshippers . . . or had they?

Strangely enough, the Minotaur forswears all claim to divinity -- and his metallic servant cannot speak at all. Instead, he comes to the Greeks bearing gifts of alien knowledge. But Daedelus at least will have cause to beware the teachings of . . . THE WHITE BULL.

-----Join Daedelus, Icarus, Theseus, Ariadne, Minos and other immortal figures from Greek legend as they seek to penetrate the truth -- in the lair of the minotaur.

In the THE WHITE BULL Fred Saberhagen again shows his prowess at giving a fascinating new spin to an old story. The narrator of this tale is Daedalus, the Greek inventor famous for the creation of human wings - in the legend his son Icarus perished while misusing them.

In Saberhagen's version, Daedalus has recently had a misunderstanding with the King of Athens, so flees to the court of King Minos of Crete. He has been working for the king for a short time when a white bull, subject of an old prophecy, comes out of the sea onto the shores of Heraklios. [Amazon, McCauley]

Like the original, this story involves tragedy as Daedalus just tries to be free. Based on a short story that I haven't read, I found this to be one of Saberhagen's better novels. If you can find a copy you should give it a look. [Amazon, Koppel]

The White Bull tells the story of Daedalus and the Minotaur, with science fiction elements replacing the acts of the gods. It was fun to see the author stick to the mythology while coming up with explanations for the fantastical elements.

I enjoyed the book and will read others by Mr Saberhagen. I already have a couple of his Berserker books and his Empire of the East trilogy lined up. [goodreads, Jseger9000]

“I have heard that King Minos of Crete is generous to artists, and appreciative of cleverness and skill. I am here to offer him my services.”
The harbormaster bowed again—actually it was more like a thoughtful nod—and considered this. “And the lady?” he asked.
I turned to look at her, an immigrant trying to see her through a stranger’s eyes. Yes, she might well have been a lady, seated and resting, wrapped in fine wool for warmth. I said: “I am sorry. This is my slave, named Kalliste; my well-loved concubine. And this is Icarus, our freeborn child.”
What might have developed into quite an awkward social moment on the mainland was passed over as a trivial error by this Cretan harbormaster. “I see … by the way, do you come here direct from Athens?”
“From Piraeus; yes.”
“And did you by any chance sail near Thera?”
I was not surprised at the question. There had been stories about strange happenings on Thera since the days of my childhood, and I supposed that there were new stories now. “No, our course lay well to the west of that island.”
“I see. Thank you. Well, welcome to Crete, eminent Daedalus. You’ll be wanting to go up to the palace right away I suppose, to the House of the Double Axe.” He eyed Kalliste’s pregnancy; she was standing now. “If you wish to spare yourself and the woman a long walk, you could ride—either on donkeys or in a wagon. The road is good.”
“The wagon, then,” I said with gratitude. “And my thanks for your assistance, worthy Hecateus.”
The other shrugged. “It is little, but you are welcome. Remember me when someday you are influential in the House.”

After conversing on that subject for half an hour with the king while we rode unhurriedly back to the House of the Double Axe, I spent another hour in a preliminary survey of the present water supply serving the palace and the town. When I got back to my new quarters I found a physician examining Kalliste. I had been in Crete less than a day, but I was no longer in the least surprised to see that the physician was a woman. Beginning to feel rather secure in the king’s favor, I said as much to her when we were talking.
“Women are not property here, sir, unless of course they are slaves.” As the doctor spoke, her bare breasts were aimed at me as boldly and provocatively as any courtesan’s. “Your girl here is doing fine. I’ll be back to see her in a month.”

That evening, Kalliste and I had our first real chance for a private conversation since our arrival. Little Icarus had already made friends with a steward’s children, and the three of them were playing together on a patio nearby.
Kalliste had already heard the rumors of Queen Pasiphaë’s lustfulness, which was said to know no bounds, and now she spoke about them worriedly. “They say she can be very cruel to those she takes as lovers.”
I was amused, and tried to relieve her fears, which seemed to me then endearingly unreasonable. “I doubt the king would put up with her taking lovers. He doesn’t seem the type to stand for that kind of nonsense. And I haven’t even met the queen officially as yet. Anyway, I doubt she’s going to be very interested in me. I’m an old man, with failing powers.”
“You’re not yet forty! And, anyway, you’re a famous man, and that intrigues some women greatly.”
I grunted noncommittally, having long ago had reason to know the truth of that.
“And you are—as I have reason to know—a very strong man still. Stronger than some of these young athletes, I’d wager.” Kalliste’s eyes flashed wickedly. “In some members of your body, anyway.”
“Come here. At last you need have no fear that I am going to want the queen. Or any other, while I have you with me.”

In designing the new waterworks, the first part of my job was to make sure of the fountainhead. At present, several sources were in use, with water being hauled by wagon to the town and palace. I went up into the foothills, where there were springs here and there, if you could find them among the rocks. I looked into the highest valleys, where lay well-nigh permanent snows, whose melting through the long summer provided another possible fount. Any of these supplies would be hard to tap. And it was going to be a long pipeline indeed from here down to the palace—long, but not impossible.
Having decided to use the springs, I needed a few days to draw up a plan for the new works, and a few more to design clay pipe in different diameters and lengths. Each length of terra cotta pipe was to be made flared at one end, narrowed at the other, so that several lengths, or hundreds if need be, could be sealed together into one long conduit with a minimal prospect of leakage.
I was surveying my way back down from the springs one day in late afternoon, deciding on the best path for the long aqueduct, when my life changed forever. Someone—I shall never know who—went hurrying past me, headed uphill. As this man or youth passed me, he called out in a choked voice that a white bull had just come out of the sea.
For a moment I did not even look up from my work. Then I did, and stood staring after the messenger in silence. By now I had been well over a month in Crete, more than long enough to begin to appreciate the local power of the ancient prophecy.
Next I turned to my assistant who had been working with me, meaning to leave this man in charge of the surveying while I myself went down to the shore to investigate this strange report. But my assistant was already gone; I was just able to see him in the distance, bounding down the hillside.

Half an hour later, the whole official party was climbing the hill on foot toward the House of the Axe, followed by a constantly increasing horde of spectators. En route the king still hovered round his chief guest, treating him as he might have treated some visiting monarch paying an unexpected visit. Some monarch of great importance, Pharaoh himself, perhaps, if any visit of that kind was conceivable.
In a hasty and informal conference we had come to an agreement with our guest the White Bull—some kind of temporary maze shelter was to be thrown up for the night. The visitor insisted that he would much prefer that to being lodged in any ordinary room, even as he preferred walking to any other kind of available transportation.
The Bull had shown no evidence of concern at being thus separated from the sea—which was presumably his home, if he were indeed sent from Poseidon. Still, at the moment of sunset, he did pause in the long climb to look back at the sea from which he had come, and to stare into the distance to the north. Then I saw him put back his head and gaze for a time up into the night sky, as if he were looking for something there, or merely wondering as a man might wonder at the stars. But in a few moments he went along meekly at the king’s courteous urging.
Meanwhile, in haste and confusion, the temporary housing project was already being begun. Squads of workmen, impressed at a moment’s notice from other tasks, were approaching through the dusk, converging on the palace. They were talking among themselves about the rumored wonders, then falling silent when the true wonders came in sight. Someone handed me a lantern, and I waved it back and forth to signal the workmen on their way.