The First Book of Swords 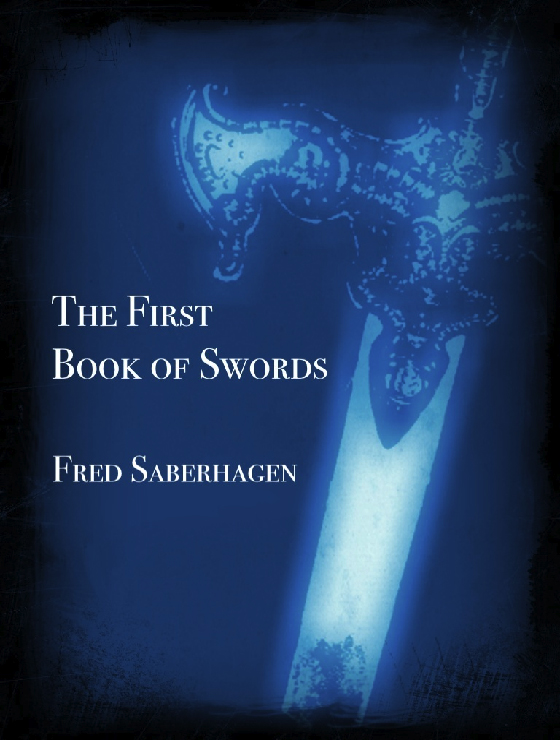 
The Swords were forged on a lifeless, wind-scoured mountaintop, with fire drawn from the Earth's belly, and metal that fell from the sky. They were tempered with human sweat and human blood by the hand of the god Vulcan, Master Smith.

There were Twelve Swords, created as the playing pieces in a whimsical game of the gods. Into each Sword was placed an awesome power -- to vanquish in battle, or stay by even more horrible means ...to deceive an enemy's eyes, or destroy his soul. . . to bestow unfailing luck, or heal . . .

Only one man had seen the Forging of the Swords of Power, a human smith named Jord. And for the arm that Vulcan took from him that unforgettable night, Jord received one of the Swords. It would be his legacy to his son.

Mark grew up with the Sword hanging on his father's wall. He knows well its keen edge and its unearthly perfection. But he does not realize its power until Duke Fratkin's men arrive one day to wrest the Sword from Jord. As Mark watches, the Sword strikes out, screaming with an inner fury that cares little for safety of its wielder. When the fight is over, the Duke's men are dead; but Jord and Mark's older brother, too have fallen.

Carrying the Sword with him. Mark flees the Duke's vengeance, heading for the lands of the Kind Sir Andrew. Along the way, he joins forces with the dragonhunter Nestor--owner, too of a Sword--and his two assistants, the big simple-seeming Ben, and pretty Barbara.

But they do not find the peace they seek at Sir Andrew's. For mighty forces are on the move, set in motion by hunger for the mastery over their fellow men promised by the Swords . . .

Taken from the cover blurb of The Complete Book of Swords


THE FIRST BOOK OF SWORDS
by Fred Saberhagen

In what felt to him like the first cold morning of the world, he groped for fire.

It was a high place where he searched, a lifeless, wind-scoured place, a rough, forbidding shelf of black and splintered rock. Snow, driven by squalls of frigid air, streamed across the black rock in white powder, making shifting veils of white over layers of gray ancient ice that was almost as hard as the rock itself. Dawn was in the sky, but still hundreds of kilometers away, as distant as the tiny sawteeth of the horizon to the northwest. The snowfields and icefields along that far edge of the world were beginning to glow with a reflected pink.

Ignoring cold and wind, and mumbling to himself, the searcher paced in widening circles on his high rugged shelf of land. One of his powerful legs was deformed enough to make him limp. He was searching for warmth, and for the smell of sulphur in the air, for anything that might lead him to the fire he needed. But his sandalled feet were too leathery and unfeeling to feel warmth directly through the rocks, and the wind whipped away the occasional traces of volcanic fumes.

Presently the searcher concentrated his attention on the places where rock protruded through the rough skin of ice. When he found a notable bare spot, he kicked, stamped with his hard heels, at the ice around its rim, watching critically as the ice shattered. Yes, here was a place where the frost was a trifle less hard, the grip of cold just a little weaker. Somewhere down below was warmth. And warmth meant, ultimately fire.

Looking for a way down to the mountain's heart, the searcher moved in a swift limp around one of its shoulders. He had guessed right; before him now loomed a great crevice, exhaling a faintly sulphourous atmosphere, descending between guardian rocks. he went straight to that hard-lipped mouth, but just as he entered it he paused, looking up at the sky and once more muttering something to himself. The sky, brightening with the impending dawn, was almost entirely clear, flecked in the distance with scattered clouds. At the moment it conveyed no messages.

The searcher plunged down into the crevice, which quickly narrowed to a few meters wide. Grunting, making up new words to groan with as he squeezed through, he steadily descended. he was sure now that the fire he needed was down here, not very far away. When he had gone down only a little way he could already begin to hear the dragon-roar of its voice, as it came scorching up through some natural chimney nearby to ultimately emerge he knew not where. So he continued to work his way toward the sound, moving among a tumble of house-sized boulders that had been thrown here llike children's blocks an age ago when some upper cornice of the mountain had collapsed.

At last the searcher found the roaring chimney, and squeezed himself close enough to reach in a hand and sample the feeling of the fire when it came up in its next surge. It was good stuff this flame, with its origin even deeper in the earth than he had hoped. A better fire than he could reasonablyh have expected to find, even for such fine work as he had now to do.