AN OLD FRIEND OF THE FAMILY 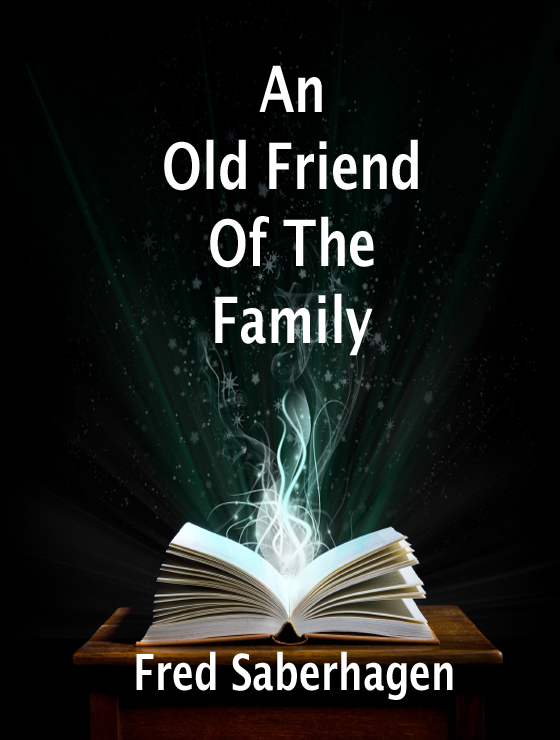 "Vampires with a difference ! And the difference is Fred Saberhagen. His writing mesmerizes." Brian Lumley.

The Southerlands are trapped in a blood-feud older than history. Their enemy is no mortal madman but the undying mistress of evil enchantment, Morgan Le Fay.

But the Southerlands are not Morgan's true target. She seeks to do battle with their protector, their defender, the only being who can save these mortals.

Kate did not sleep, or lose consciousness completely, but lapsed into a queer, semi-waking state. Her eyes, half-open, ached in the sunlight reflected from one dingy wall. But she did not even blink, afraid that if she tried to move she would find that she could not.

There were feet on the stairs, voices outside the door, then in the room with her. Three or four men, talking in low voices. A couple of them wore fur-collared blue Chicago police winter jackets, with badges on their fur-flapped caps. She could see details very clearly whenever they came into the center of her field of vision.

They'll take me home. Kate thought, they'll snap me out of this. One of the men took her arm to lift it. It clung to her side, amazingly stiff, resisting her pull without the least effort on her part.

The policeman said, "My guess is two, three days since she died.

A brief excerpt taken from Chapter One

It looked like the North Atlantic raging at the Devon coast, Kate told herself, recalling a childhood trip to Europe, and the enduring memory of the ocean pounding at those rough English rocks. Now, under the glare of the close-ranked floodlights along the Outer Drive, she saw the black lake reach a fist in pats the wintry void, where summer knew a strip of sunwhite beach. Above the ice-draped slats of snowfence the fist shook spume at city and civilization, then crashed down, dissolving itself in an open-handed splash that washed across six of the eight lanes of forty-mile-per-hour traffic. The traffic wavered, minimally slowing, some of it skidding perilously in the freezing wet. If things kept on this way, the police were going to have to close the Drive.

Twenty or thirty yards inland, on pavement separated from the Drive and the reaching waves by a wide divider strip of frozen parkland, Kate's Lancia purred sedately south. Most of her attention was concentrated upon the task of reading addresses from the endless row of tall apartment building fronting on Drive and park and lake. The particular numbers she had been looking for now suddenly appeared, elegantly backlighted against a towering granite wall. She slowed and turned. The righthand curve of driveway went down to a basement garage, but she stayed with the left branch, rolled past two parked Cadillacs and a Porsche, and pulled up under the building's entrance canopy.

Despite the heatlamps fighting down against the wind and cold, the uniformed doorman wore earmuffs above the collar of his winter jacket. His eyeglasses were so thick as to resemble frosted protective goggles of some sort. taller than he, Kate swept in through the door that he held open for her, meanwhile pulling back the hood of her warm blue jacket from natural blond curls.

"I'd like to see Craig Walworth. Tell him Kate Southerland is here," she told the man when he had followed her into the lobby. A few moments later, after the intercom had brought down Craig's acceptance of her visit, she was alone in a small elevator.

If Joe were with her now, he'd be worrying about what the doorman was going to do with the car--or about something else, about anything, maybe just about dropping in on a party unannounced. But then if Joe were with her tonight she wouldn't be coming here at all. Which, of course, was really the whole point. She hadn't made any commitment to Joe--not yet. If and when she did, things would be different.

And how they would.

Maybe the real point was the fact that she felt compelled to make the point. If she was so certain of her present freedom, why was she here trying to prove something to herself? She could have gone Christmas shopping instead. And she probably should have. For one thing she still faced the problem of a gift for Joe, who was certain to spend too much of his money buying one for her . . .