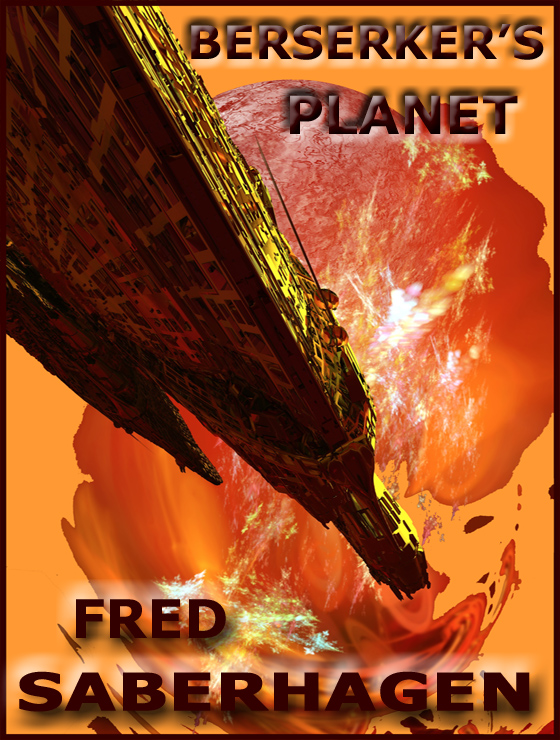 Available in e-format from Kindle, Nook, iTunes, and Kobo

BERSERKER is a registered trademark of JSS Literary Productions and can not be used without permission.
Five hundred years have passed since the combined fleets of humanity met and broke the berserker armada at Stone Place. But through the human victory was total, one of the killer machines--weaponless, its star drive a ruin-- managed to limp to secret sanctuary on a planet called Hunter's World. Over the years since then a new cult has arisen there, a cult dedicated to Death as the only and ultimate Good. For Hunter's World has become BERSERKER'S PLANET.

The rifle stuttered in Suomi's hands. The sword-brandishing golem's left arm erupted in a spray of dry-looking particles and smoke as the man-thing spun in an incredible pirouette, more graceful by far than any wounded animal. Knocked off balance and deflected from its course by the shock of the rifle's force-packets, the towering shape slid past Suomi and on down the sloope.

But it did not fall. In another moment, near the bottom, it had regained full control and stopped its slide. Then it turned and was calmly climbing, like a mountain goat, at a fast run.

The sword, whirling and gleaming, came toward him once again . . .

Taken from: CHAPTER ONE

The dead man's voice was coming live and clear over ship's radio into the ORION'S lounge, and the six people gathered there, the only people alilve within several hundred light years, were listening sttentively for the moment, some of them only because Oscar Shoenberg, who owned ORION and was driving her on this trip, had indicated that HE wanted to listen. Carlos Suomi, who was ready to stand up to Schoenberg and expected to have a serious argument with him one of these days, was in this instance in perfect agreement with him. Athena Poulson, the independent one of the three women, had made no objection; Celeste Servetus, perhaps the least independent , had made a few but they meant nothing. Gustavus De La Torre and Barbara Hurtado had never, in Suomi's experience, object to any decision made by Schoenberg.

The dead man's voice to which they listened was not recorded, only mummified by the approximately five hundred years of spacetime that stretched between Hunters' system, where the radio signal had been generated, and ORION'S present position in intragalactic space about eleven hundred light years (or five and a half weeks by ship) from Earlth. It was the voice of Johann Karlsen, who about five hundred standard years ago had led a battle fleet to Hunters' system to skirmish there with a berserker fleet and drive them off. That was some time after he had smashed the main berserker power and permanently crippled their offensive capabilities at the dark nebula called the Stone Place.

Most of the bulkhead space in the lunge, was occupied by viewscreens, and when, as now, they were adjusted for the purpose, the screens brought in the stars with awesome realism. Suomi was looking in the proper direction on the screen, but from this distance of five hundred light years it was barely possbile without using telescopic magnification to pick out Hunters' sun, let alone to see the comparatively minor flares of the space battle Karlsen had been fighting when he spoke the words now coming into the space yacht's lounge for Schoenberg to brood over and Suomi to record. Briefly the two men looked somewhat alike, though Suomi was smaller, probably much younger, and had a rather boyish face.