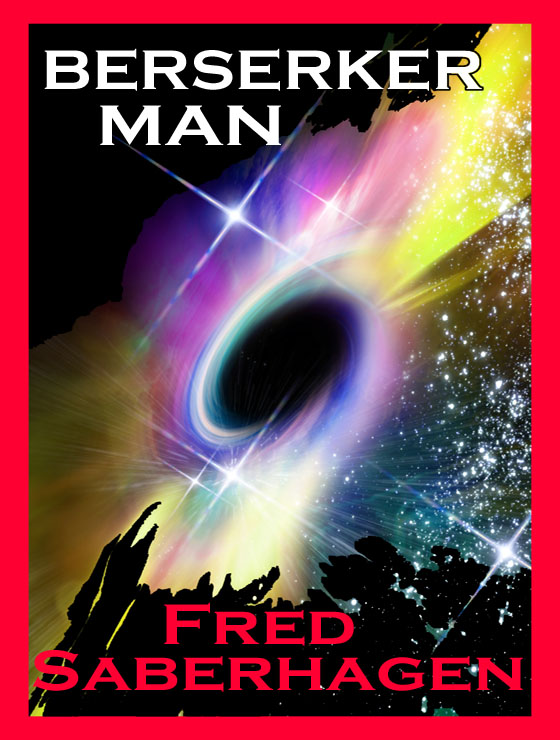 Available as an e-Book from Kindle, Nook, iTunes, and Kobo

Once mankind feared the berserkers, killer machines determined to eradicate all life in the universe. But the Berserker Wars are over and the threat of the sentient doomsday devices is over.

The berserkers are back, stronger and more unstoppable than before. And one strange child, half human and half machine, may be humanity's only hope -- or its final destroyer.
Now the fate of civilization rests in the hands of Berserker Man

He was driving them in evasive maneuvers now, while the hull crashed like a gong, and flashes of enemy force were plain in the simultaneous overload of instruments. Flash and crash again, blinding stroke from the enemy and blending sigh of their own weapons lashing back, more in defiance than in any true hope of damaging Goliath. The berserker which had caught them by surprise was too big to fight, too fast to get away from, here in relatively open space. Nothing to do but dodge--

Yet again the berserker struck . . .

Well, Elly Temesvar thought gravly, we've given it a good fight, done better than anyone might have expected, considering how little ship we have to fight it with.

Out perpendicularly from the surface of a peculiar star there jutted what looked like a transfixing spear of plasma, bright as the star itself, as thick as a major planet, and so long that it looked needle-thin. On the jet's brilliant, almost insubstantial surface the little duoship that Elly and her partner rode in clung like a microbe on a glowing treetrunk, in an effort to find concealment where there was really none. And somewhere on the other side of the shining plasma fountain, a hundred thousand kilometers or more away, the mad berserker stalked them. Berserkers were pure machine, of course, but still in Elly's most heartsure mental images of them they were all mad -- she smelled on them the suicidal madness of their ancient and unknown builders.

The odd star that drained itself into the plasma jet was close enough to have been blinding were not the ports all sealed opaque for combat. And despite the nearness of the Galactic Core, few other stars were visible. Bright nebular material filled cubic parsec after cubic parsec in this region, hiding everything else and evoking old legends of lightspace in which the stars were only points of darkness.

"Pull in the scanning nodes just a touch on your side, Elly." Frank's voice, as usual sounding almost imperturbable, came into her earphones. He was on the other side of the thick steel bulkhead that completely bisected crew quarters when its hatches were closed for combat. In theory one compartment might be breached, while the human in the other one survived to fight on. In practice, this time, the whole craft was just about to be crunched like a pretzel, and Elly in moments of free mental time wished that she might have, at the end, at least as much human contact as open connecting hatches could provide.

She did not voice her wish. "Nodes in," she acknowledged instead, in trained reaction that seemed to function independent of her will. Her fingers had meanwhile remained poised but motionless upon the ten keys of her auxiliary controls. Through her helmet the electrical waves of her brain directly drove the equipment for which she was responsible, in a control system that worked a large fraction of a second faster than any dependent upon arm-length nerves.