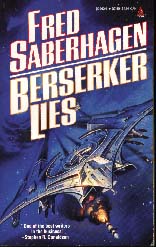 Our wars were behind us. Mankind was moving out from the planet of its birth. New worlds were settled and with the wealth of the galaxy at hand, poverty was eliminated. Then out of a clear summer sky came the first berserker attack.

The final battles began -- the battles between life and non-life, between the great killing machines we came to call berserkers and humanity, all that it was or had ever held dear.

Some of those battles would be waged with lies . . .


The berserkers -- in single-minded pursuit of their preprogrammed course of destruction, they attain a kind of perverse stature that makes them worthy stand-ins for the dark side of human nature. --- New York Times

Truth and lies, denieal and proof, creation and evolution, flesh and metal -- all have roles to play in the spinning and weaving of the threads of life. And in which element does the greatest power lie?
---Third Historian of the Carmpan race

Taken from: THE MACHINERY OF LIES

Tanya Serafeddin, peering through the forward windows of the ground-crawling shuttle in which she was the only passenger, scanned the flat kilometers of concrete ramp under the endless curve of blue sky striped with bars of varicolored cloud. Within the cloud-bars turbulence made many shapes, suggesting and animating one form after another, some familiar, some fantastic. But Tanya, long accustomed to the show, ignored it. She was trying to see or at least to guess successfully which of the parked interstellar spaceships dotting the broad expanse was the Lady Blanqui's yacht. The problem was complicated by the tendency of starships of any kind to have basically the same shape. The generic resemblance did not extend to color schemes, but Tanya had no idea of what to look for there. Ahead and on both sides of the shuttle she observed a collection of spheres, or near-spheres, ranging in size from launches and personal craft even smaller than a small house to liners and military ships the size of office buildings.

Now passing on the right was a freighter which had probably been a month in subspace, voyaging with exotic cargo from some remote world far outside the Tallart Cluster. And there on the left, in the opposite row, a hundred meters from the freighter, squatted a white-hulled Templar warship, bristling with weapons. The fighter would be poised to leap into space, Tanya supposed, as soon as the next rumor reached Malawi of a berserker's presence anywhere within range of a two- or three-day patrol.

When at last the automated shuttle stopped and opened its right-side door for its only passenger, Tanya felt vaguely disappointed. The Lady's yacht, called the GOLDEN HIND, was remarkably ordinary in appearance, and definitely in the small house range of size rather than that of office buildings. Though Tanya did not consider herself expert on space armaments, drives, or detection/astrogation systems, she was able to deduce something in each of those categories from the outward appearance of the craft. And nothing she deduced about the yacht particularly impressed her either.