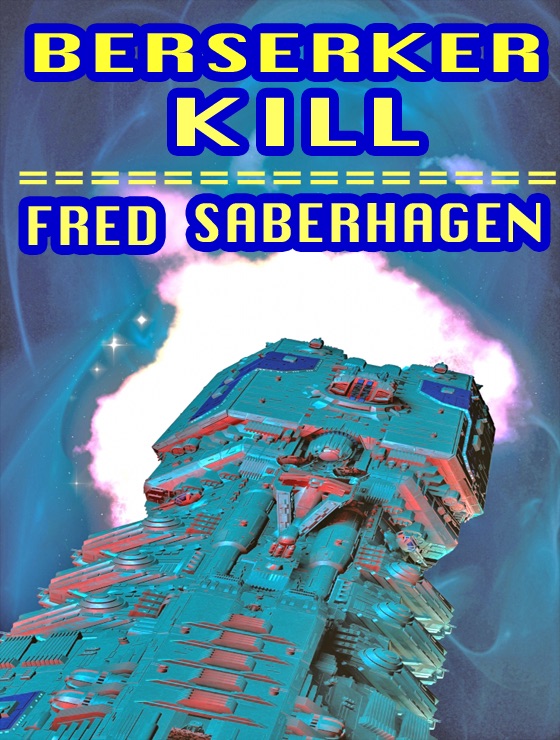 Available as an e-Book from Kindle, Nook, iTunes, and Kobo

Long, long ago. . . two alien races fought a war of extinction. All that is left of either of them are the Berserkers: vast, thinking, space-faring, killer machines whose sole purpose is to destroy all living things. For the first time in all of their history, they have met a life form that has a chance of stopping them.

In the cold reaches of space, the Berserkers seize a floating laboratory full of human germ-plasm--stored for retrieval and growth in a future colonization project. But the ship contains millions of human lives. Why are the Berserkers not destroying them? And will the human pursuers manage to find the missing lab, defeat the Berserkers, and save the nascent lives?

A major Berserker novel -- one of Saberhagen's finest -- with one hell of a surprise up its sleeve.

Saberhagen's Berserker series chronicles the ongoing conflict between space-faring humanity and the doomsday war machines of the title, programmed to exterminate all life. Emerging from the depths of the Mavronari Nebula, a berserker ship takes human prisoners, steals a research station orbiting the nearby planetoid Imatra--which carries a billion stored human zygotes intended for a colonization effort--and heads back to its Mavronari hideout, leaving Imatrans mystified. Premier Dirac Sardou, believing his newlywed wife may still be aboard the station, assembles a make-shift force and pursues, never to be heard from again. Three centuries later, a new berserker attack demolishes Imatra; another human expedition gives chase, and what they find in the Mavronari dust cloud is stranger than anything they expected. Saberhagen breathes life into the often-arid soil of future-war SF with intriguing characters, neat plot twists, rousing action and no trace of the gung-ho macho posturing that marks much military science fiction. This smart, fast-moving story is edge-of-the-seat reading.

The ship was more intelligent in serveral ways than either of the people it was carrying. One task at which the optel brain of the ship excelled was computing the most efficient search pattern to be traced across and around the indistinct, hard-to-determine edges of the deep, dark nebula. Most of the time during the mission the ship drove itself without direct human guidance along this self-selected course, the yawning, million-kilometer chasms in the clouds of interstellar gas and dust that made up the Mavronari.

The only reason that such ships weren't sent out crewless to conduct surveys without direct supervision was that their intelligence was inferior to that of organic humanity when it came to dealing with the unforeseen. Only breathing humans could be expected to pay close attention to everything about the nebula that other breathing humans might find of interest.

excerpt from Chapter One:

A man and a woman, Scurlock and Carol, crewed the survey ship. The couple had known for months that they were very right for each other, and that was good, because being on the best of terms with your partner was requisite when you were spending several months in the isolation of deep space, confined to a couple of small rooms, continually alone together.

Carol and Scurlock had been married shortly before embarking on this voyage, though they had not been acquainted for very long before that. By far the greater proportion of their married life, now totaling approximately a astandard month, had been spent out here nosing around the Mavronari Nebula.

The ship was not their property, of course. Very, very few individuals were wealthy enough to possess their own inter-stellar transportation. It was a smallish but highly maneuverable and reasonably speedy spacecraft, bearing no name but only a number, and it was the property of the Sardou Foundation, wealthy people who had their reasons for being willing to spend millions collecting details about some astronomical features, certain aspects of the galaxy, which most Galactic citizens found highly exciting.